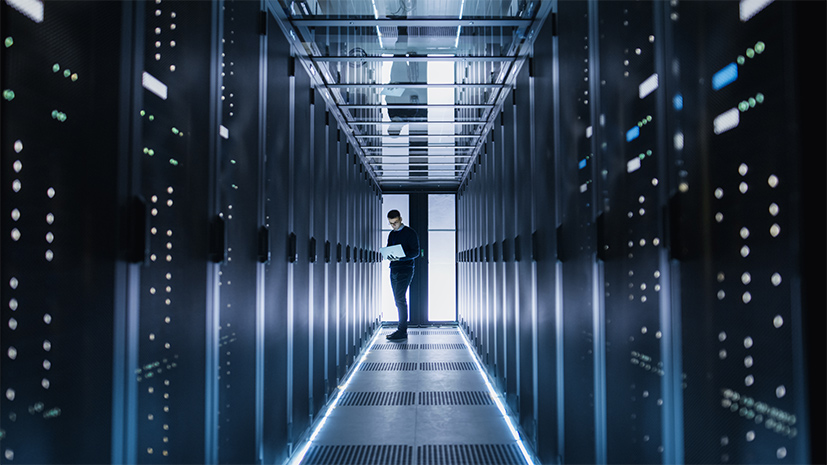 If you’re searching for Linux backup solutions, we commend you for taking seriously an area that many organizations neglect. Just about every business has methods of backing up at least some of its data, and many have a means of restoring business applications after a system outage. But if you’re considering backing up on a wider scale rather than simply copying what you consider to be your most important files, you’re obviously willing to give your organization a higher level of protection.

The question remains: what should that protection be? That’s not a question we can answer in a few paragraphs because it depends on where your Linux servers are located, how quickly you want to be able to restore your systems after a crash, and how much of an investment you’re willing to make in Linux backup solutions (hint: you need not break the bank, but freeware probably won’t cut it, either).

Part One: Where Are Your Servers?

You can’t find the right Linux backup solution until you’ve thought about where your Linux servers are located. They’re probably either in a third-party data center (co-location) or in a server room on your company’s property (on-premises).

Third-party data centers come in several flavors. Some data center providers provide rack space in a data center but leave you responsible for maintaining your servers. Other vendors provide a full range of services, such as backups and monitoring.

And then there are cloud data centers (often called “infrastructure as a service,” or IaaS). Some IaaS providers offer full service. Others (including Amazon) simply offer the servers but leave you to maintain them.

The truth is, most organizations have a mixture of all of the above. Companies will probably always find a need to manage some of their own servers, whether those servers are down the hall or in a data center in the next state. And despite all the buzz that cloud computing has received in recent years, a 2019 survey revealed that 98 percent of companies still had at least some on-premises servers. Having boxes in-house continues to appeal to CIOs who want to protect themselves from cloud vendors who may raise prices, change terms of service, or simply go out of business and leave customers scrambling. A capable IT team can maintain a server in-house quite cost-effectively. And some executives would prefer the capital expenditure of a server purchase to the operating expenditure of a cloud server.

“There is a fairly significant amount of repatriation going on,” said Michael Dell, in an interview with CRN. “As much as 80 percent of the customers across all segments – small, medium, large – are reporting that they’re repatriating workloads back to on-premise systems because of cost, performance and security.” ¹

If it’s fair to assume that businesses will always have some physical servers, then it’s also fair to assume that most—if not all—businesses will tap into the cloud for at least some of their computing power. In fact, the trend is towards more cloud servers and fewer physical ones. But as companies increasingly embrace the cloud, a dangerous myth is emerging—one that says the need for backups is disappearing along with the company server room.

Nothing could be further from the truth. As long as your company has mission-critical applications that cost you thousands of dollars for every hour they stay down, and as long as you have irreplaceable data, you’ll need backups.

But as we will soon explore, not all backups are created equal. If you’re backing up all your mission-critical servers to the cloud but it would take 10 hours to restore them, you don’t have a solution—you have a potential problem. If your cloud provider has all the control over your applications and data, how long will it take you to restore that backup on premises at your company? The answer to this question can make or break your Linux backup strategy.

“Remember that the cloud service you use, whether it is IaaS, PaaS, or SaaS, is just another data center like one you might build yourself—only it’s in another place run by other people. They may be the best at what they do, but neither they nor the systems they employ are infallible. That is why you should always have backup and disaster-recovery plans in place. Hope you never have to use them, but have them ready if you do,” says W. Curtis Preston, Chief Technical Evangelist at Druva. ²

Now, how does cloud repatriation change the picture? This is a new trend in which some companies are moving their cloud workloads back to on-premises servers. Cloud repatriation doesn’t indicate a permanent shift away from cloud resources—indeed, there are many reasons companies may choose to take some of their resources back in-house, and many do so only temporarily. But as companies move workloads freely to and from the cloud, the need for a comprehensive, flexible Linux backup strategy only becomes more urgent.

In a sense, there’s only one best practice for Linux backup: back up your business environment in such a way that you can restore data and applications in minutes, not hours. Of course, designing such a plan is the difficult part. In the process, system administrators often make one or more critical oversights or mistakes. For that reason, it may be most helpful to express best practices in terms of what not to do.

Here are several Linux backup mistakes that can threaten the health of your business:

The ideal Linux backup strategy will revolve around a solution that can perform full-system backups—and it will call for you to conduct disaster recovery drills just as often as you did before you started moving your data and applications to the cloud.

“In some cases, keeping certain backup or disaster recovery processes on-premises can help you retrieve data and recover IT services rapidly. Retaining some sensitive data on premises might also seem appealing if you need to comply with strict data privacy or data sovereignty regulations,” says IBM. ³

As you consider possible Linux backup solutions, you have no shortage of options. However, here’s a scorecard with services to consider as you shop around: 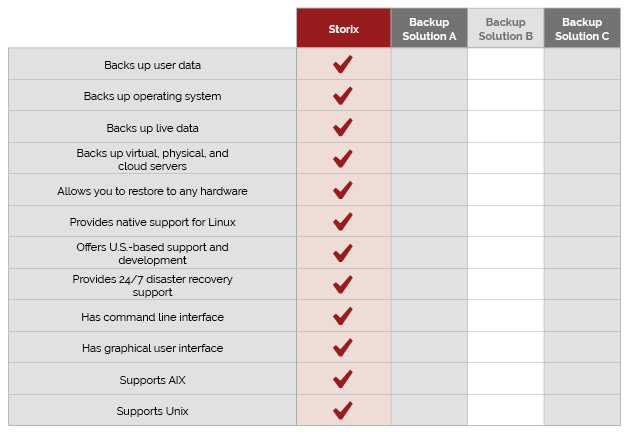 It’s a crowded market for Linux backup solutions. But don’t make the mistake of thinking that one solution is as good as the next—or that a freeware solution deserves consideration simply because it won’t increase your IT budget.

To ensure that your business can meet its RTO and RPO, you need a full-system backup solution that enables you to restore to any hardware in minutes—not hours or days. Storix SBAdmin is that solution.

As we mentioned above, Storix only backs up Linux, Unix, AIX, and Solaris. But it provides the highest level of protection for these systems. So, if your organization is also running Windows or Mac servers, we believe you should implement Storix for Linux and a separate solution for Windows and Mac.